I have to decide what to do with my grandfather’s military uniform jackets. When he passed away several years ago, my grandmother hesitated about giving them to Goodwill,  so I asked for them. I knew he valued the wool jackets with worn patches. They were to him what a wedding dress is for a woman – a barometer of youth and golden days. He was so proud that he could fit into them after a grandma-induced diet,  that he modeled them for me whenever I visited. 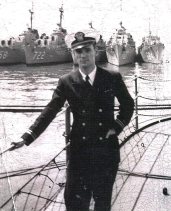 her was an old-fashioned gentleman, born into a Midwestern upper middle class family with all the sensibilities and prejudices that came of the time. He was kind to his family, though, tolerating a monsoon of estrogen and talk about “feelings”.  I think he was relieved when I got married, if only to have one more player for the men’s team.

For many years, he was a book salesman, traveling all over the Midwest. He told funny stories with enthusiasm and wonderful accents. He loved to tell jokes. After I joined the Army, he was relieved that he finally had someone to talk to about his military experience. He’d tell anecdotes from his stints in the Navy and the Army, about customers he’d met on the road and about an idyllic childhood in Illinois.

Big band music was his bailiwick. He would make tapes of the music he loved, recording himself as the DJ in between songs.  Standing in the kitchen with his finger near the pause and rewind buttons, he’d say, “Listen to this part, kiddo.” He wanted me to hear what he heard, to not miss a trumpet solo or drum flourish. When I was younger, I learned to play Glenn Miller, Hoagy Carmichael and Tommy Dorsey on my flute (small band music!) and we’d play “Name that Tune”.

My grandfather also helped me learn the value of civility and respect. He was from a different time – we argued about women in combat, gay rights, economic and foreign policy, exchanging several long and heated letters over the years about our beliefs. It never changed our regard for each other. It was never nasty or mean or irretrievably damaging to our relationship. It was okay to disagree and still like each other.

I grew up abandoned by a father and living in fear of an alcoholic stepfather. My grandfather was there, walking me down the aisle when I got married and then years later,  listening to my talkative toddler while she sat on his lap. In a family where men have not come off well, my grandfather was the guy who redeemed them all.

I mourn him now more than ever. My family of origin is extraordinarily private, insular and can be counted on one hand. There was no memorial or celebration of my grandfather’s life. There was no way for me to say goodbye or shed tears. One day he was just gone, with nary a whisper in the universe.

It is human nature to want to leave an indelible mark, to pass on a part of ourselves – to know that we mattered. Sometimes this is what drives us to have children, to work so hard at a career or even to write a blog. Most of us will never pass this way again and only live on in the memories and hearts of the people who loved us.

In a family as fractured as mine, so many memories have been forever lost. There are some memories no one wants to retain, but in the case of my grandpa, I will be his standard bearer. I will write about him, tell my daughter the jokes and stories, keep records, do my best to be a caretaker of the things that were important to him. He mattered in a way that all good people should. Not loudly, but immeasurably.

His tumbledown end began with one stroke followed by another. One of our last phone calls ended abruptly, as I began to cry while he struggled to speak, an effort that surely exhausted him. I miss his stories, even though I heard them a hundred times. I miss his presence in the world. The music he loved so much will remain on my playlist and I will hear him saying “listen to this, kiddo”.

For now, I’ll carefully store his jackets, so that someday, someone else will have to wonder what to do with them and recall the stories and music and that he was loved by me. And the beat goes on.