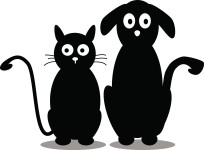 In psychiatric terms, I experience feline homicidal ideation every single day. Here was my mistake: I thought adopting two cats from the humane society would somehow ameliorate the grief I felt over losing my dog, Elliott, after 14 years of loyal and generous companionship. I’ve never ascribed to being either a cat or dog person. Now I can genuinely say I’m no longer a pet person. By the way, say none of the above in front of your vet, unless you want to be considered a “person of interest” in their files.

Pete and August were companionable cats. On occasion, tiny August would smack monster Pete in the head when he became too rowdy. One sunny October day, after a week of misery, we had to have August euthanized to end her suffering from kidney disease. Pete was inconsolable and began to prowl nightly with a lonesome yowl. We decided he needed another friend from the shelter.

Owney was a friendly, vocal cat right from the start and took to our daughter immediately. As I finished filling out the adoption paperwork and paid the fees, the helpful volunteer said “Oh, here’s some more history on Owney.” We were bringing her to her 3rd home. The first home gave her up because she didn’t like children. The second gave her up because she didn’t like other cats. That was my first inkling that this could all go horribly wrong, but try telling your 4 year old that she has to put the kitty back. I remained optimistic. Because I had to.

We followed all the advice on how to introduce a new cat to the resident cat. Owney adored my daughter and slept with her every night from the start. But cut to four years later – poop reprisals, hissing and spitting and swatting when there is even a possibility of food, meowing like a crying baby, which starts at about 4am, random peeing. And that’s just Owney. Pete, for his own part, has continued his tom cat prowling and yowling, stalks Owney at every opportunity and does his best to make us trip over him by walking casually in front of us and then recklessly flopping on his side, a furry speed bump. I do not like our cats, Sam I am.

At our last vet visit, after expressing my frustration with the fighting and the litterbox episodes, the vet suggested an anti-anxiety medication (Prozac, to be specific) for Owney. Really? Can’t she just take up yoga or maybe drinking? I’m a little wary of psychotropic drugs for people, much less for creatures who can’t say things like “I just feel so out of it, like I’m not myself”. I made some derisive comment about how I actually might need the Prozac and left the vet’s office.

Upon remodeling our basement, we realized, after seeing the stains on the old carpet, that things could not stand. Needless to say, our cat is now being medicated. I’ve taken to calling her Stowney and feel compelled to confess to everyone on the planet that my cat is now on Prozac. She still loathes Pete, but her anxiety about the litterbox has dissipated. It’s not the peace we hoped for, but it’s the peace we have.

I love animals and for most of my life, I’ve had a dog or cat. Maybe it’s caretaking at a time when everyone and everything else must be cared for as well. My husband, who had very few pets growing up, thinks it’s weird to have animals that go to the bathroom inside (excluding homo sapiens, apparently). Then that leads to a nonproductive discussion about why I think training cats to sit on a toilet is gross. I love them, but I don’t like them. As they stare at me balefully from their regular posts in my study, I’d say the feeling is mutual.

P.S. Does anybody remember the movie “The Uncanny”? It came out in 1977 and forever altered my ability to be comfortable when cats stare at me.