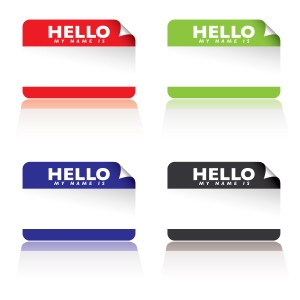 I’ve finally recovered from an injury called “turf toe”, a common injury for athletes who quickly change directions, jump and push off of rigid surfaces, like football players and martial artists.  I did it while sparring in taekwondo with a large and formidable opponent, an unmoving wall of Axe deodorant and teenage defiance.

Thinking of myself as an athlete feels only slightly less pretentious than calling myself a writer. If who we are is what we do, then perhaps both appellations apply, but sketchily. I’ve only begun to get a little more comfortable with writer, since it is so often interrupted by other titles: chauffeur, accountant, nurse, volunteer and the “what’s for lunch?” lady.

It is human nature to label and compartmentalize – especially one’s self.  Enlightened and self-actualized people may live as an integrated whole and never question themselves by label. I am not far enough along the path of enlightenment, having made several picnic and rest stops along the way at Self-destruction, Laziness and Apathy (there’s a lot of people parking at that stop).

Beyond the labeling of occupations and hobbies, we also have a more adjectival way of naming ourselves. Negative labels that come and settle in as we’re growing up, or during times when we are vulnerable to unkind messages – as children, after a relationship breaks up, a job ends, lapses in self-esteem. For many years, the negative tapes in my head (I know, I’m dating myself – maybe yours is a data chip) would play in a loop.

The most effective tool I’ve ever learned was in a parenting book and it’s a cliché: Characterize the behavior, not the person. We don’t just need to do this with children, but with ourselves. I started to pay attention to what I called things. When I dropped something, I was clumsy. When I gained a couple of pounds, I was a gi-normous whale. When I forgot to do something, I was an absentminded jerk. We wouldn’t do this to someone we cared about – could you imagine calling a friend a clumsy, fat jerk?

I was taking a universal approach to negative or even neutral occurrences that did not apply to me as a whole person. I had to unlearn that behavior. Kids must learn that failure and mistakes are not what defines a person, but how they react to those errors does. It’s a skill that impacts our entire lives.

How many adults do you know that don’t have that skill? They are unlucky or “shit magnets” and full of tales of injustices, transgressions and bitterness. They can’t let things go or move forward. They look older than they are – you want to find another water cooler, checkout lane or playground just to get away from them. If it’s exhausting to hear, imagine living it.

I came across Dr. Martin Seligman’s Learned Optimism: How to Change Your Mind and Your Life. One of the labels I had heard applied to myself, and had internalized, was that I was a pessimist, so naturally this book title appealed to me.

It turns out that I was already doing many of the things that an optimist would do. People were characterizing my occasional very dry, dark sense of humor as pessimism, when it was an effective coping mechanism. I tend to get up pretty quickly when I’ve been knocked down, believing optimistically, like Scarlett O’Hara, that tomorrow’s another day.

So my friends, have a good Monday! Or maybe Tuesday. There’s always Wednesday…

What do you call yourself when no one’s listening?