I’d like to introduce you to the 1st Place Winner of The Green Study Holiday Humor Contest, Ruth from Life in the 50’s and Beyond. Below is the winning entry and the one that practically made me snort coffee out of my nose when I read it. The 1st Place winner had a donation made on her behalf to the Red Cross, will receive an organic Harry and David fruit basket and a not-so-collectible postcard from Minneapolis.

by Ruth at Life in the 50’s and Beyond 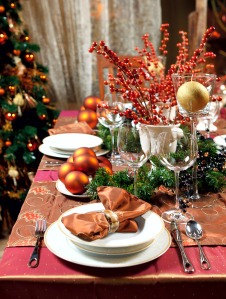 It was early into my marriage, thus my cooking skills were not fully developed.  Nonetheless, I invited my parents and my in-laws to dinner, the first time attempting to prepare a full “formal” holiday meal for anyone.

I planned out the menu, shopped for the ingredients, all the while trying to make it simple so it would turn out well.  The menu consisted of ham, escalloped corn, mashed potatoes and gravy, and rolls.  I am pretty sure there was a dessert but I don’t remember what it was … it has been almost 40 years.  I bought a new tablecloth for the kitchen table and made sure all the silverware had no spots.

The big day came, I spent all morning cooking and baking and scrubbing the kitchen floor and trying to make it all perfect.

At 10:00am, I placed the ham in the oven, carefully following the directions on the package.  Bake at 350 degrees for 1 ½ to 2 hours or until ham is heated through.   The corn could wait a little longer, the potatoes were peeled and on top of the stove covered with cold water until time to boil and mash them.

I was standing at the kitchen sink washing up all the dishes I had dirtied in the process.  I began to wipe fingerprints and any spots from the kitchen cupboards.  The ham had been in the oven for about 30 minutes and the kitchen smelled really good.  I was feeling pretty good about myself.

All of a sudden there was a deafening sound and huge thud.  I turned around just  in time to see the entire harvest gold oven door hit the wall on the other side of the kitchen.  Bits of ham had exploded all over the ceiling, the floor, the cupboard doors, the kitchen table, the windows, and me.   I was in shock.   I quickly turned off the oven and surveyed the damage.  The oven door looked okay except it was lying on the floor and not on the oven.

I ran out to the barn, now crying because everything was such a mess.  I found my husband who was cleaning out the hog pens and told him what had happened.  He looked at me covered in bits and pieces of ham (rather ironic standing in a hog barn) and headed back to the house with me.

He surveyed the damage and began to help me clean up.  As he attempted to reattach the oven door he pulled out a big chunk of metal from the inside of the oven. 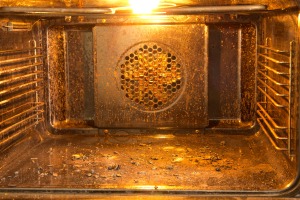 He gave me that look that I would come to know well during the next 40+ years.

“You know,” he said, “you are supposed to take the ham out of the can before you bake it.”

Congratulations, Ruth! Be sure to check out her blog.

Here’s a tasty sampling of her posts: