Meet Fransi, who runs two blogs: a professional blog fransi weinstein et al and her personal challenge blog,  Three Hundred Sixty-Five. She is an Honorable Mention from The Green Study Holiday Humor Contest.  She’s a terrific writer with an interesting background in advertising. I’ve enjoyed reading her posts as well as her kind and engaging comments on my own blog. She received an invaluable collectible postcard from Minneapolis. 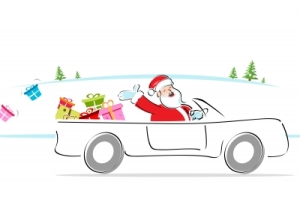 I love Christmas.  Always have.  Yes, I am perfectly aware I’m Jewish.  Don’t see why it has to stop me from loving Christmas.

In fact, I have many, many, many wonderful memories of Christmases I’ve spent with my closest friend, and her family.  I think of them as my family, too, as one would after forty years.  One year, probably about thirty years ago, we were celebrating at her brother and sister-in-law’s house.  They’re a large family, so the venue changed regularly.

Anyway, they lived in a suburb of Montreal called the West Island.  It’s about thirty or forty minutes from the centre of the city, where I lived.  As I was getting all my stuff together, in preparation for going up there for the weekend, my phone rang.  It was Marilyn (friend) telling me not to drive.  Ronnie, her brother, wanted to pick me up.  It seemed ridiculous to me.  But the more I insisted, the more she insisted.  What could I do?

When the doorman called to tell me I had a guest on the way up, he was laughing.  I thought nothing of it.  My doorbell rang.  I opened the door.  And there, standing in front of me, was Santa Claus.  Big belly, black belt, high black boots, white curly hair, snow white beard, a cap at a jaunty angle, and a twinkle in the eyes.  What a twinkle!!!

“Ho Ho Ho”, he yelled, rubbing that huge stomach of his.  “Merrrrrrry Christmassssssss!”  I screamed.  Jumped up and down like a child.  Clapped my hands.  Soon, he was joined by his two elves, who’d been hiding around the corner.  Marie, his wife and my friend, Marilyn.  We made such a racket all my neighbours started opening their doors.  Soon we were having a party in the hall.  Everyone was laughing.  It was hilarious.

It’s a shame we didn’t have cell phones with cameras in those days.  The look on my face would have made one hell of a picture.

Believe it or not, he’d driven all the way downtown dressed like Santa.  They told me they’d literally stopped traffic.  I’m not surprised.  Are you?  And we drove all the way back to their house, with him dressed like Santa.  Some drivers sidled up to our car, lowering their windows to wish us a Merry Christmas.  We had a procession of cars following us, horns honking like you wouldn’t believe.  Even traffic cops smiled and gave us the thumbs up.

He, of course, loved every minute of it.  As did we.  As did everyone else on the road that day.  HO HO HO, indeed!  Hope yours was every bit as merry.

Be sure to check out her blogs (1 & 2) and some her favorite posts:

Administrative Note: The Green Study is on hiatus this week and will, in the meantime, be posting the Honorable Mentions for The Green Study Holiday Humor Contest, as well as passing on some blogging awards. I look forward to catching up with everyone upon my return!