From Diane over at westlakemusings, I am happy to post yet another Honorable Mention from The Green Study Holiday Humor Contest. She was sent an antique (dated back to 2012) postcard from Minneapolis for her entry.

Our Family Christmas Just One Block Off Duval Street

Looking back now, I chuckle remembering the Christmas of 2010.  What a bizarre mess of a holiday we had that year.  It had been a long sad year.  We now faced a Christmas where the empty chairs threatened to spiral us into grief all over again.  It was time to step away from tradition and shake things up a bit. We decided to take a family vacation away from the ice and snow of Toronto and fly south to a happier location.  Well, we achieved our goal. 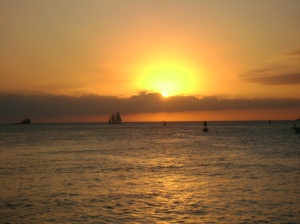 With hindsight, we didn’t take a lot of time to plan this holiday.  We flew into Miami on Christmas Eve, rented a car and drove south.  Our destination was the most southern tip of Florida.   We were able to rent a three bedroom house, with its own pool, just one block away from the action on Duval Street, in Old Town, Key West.  It sounded perfect.  A quick stop at the Winn Dixie on Christmas eve and we filled our shopping cart with all of the holiday essentials:  a pre-stuffed frozen turkey, instant potatoes, a box of red velvet cake mix, wine, eggnog, candy canes and even a string of Christmas lights to drape around the patio furniture.  Christmas would find us this year even if we were not at home.

Our rental house was everything they had advertised.  It was cute. The pool was beautiful and private gardens were lovely.  It was nicely decorated but for a few troubling touches, such as the stained glass window of a penis.  How strange.  To quote the Wizard of Oz, this was the first indicator that we were “not in Kansas anymore”.

The rental of our little house was somehow tied to the larger hotel next door.  The daily pool maintenance man came through a gate in our shared fence. Holy moly, he was handsome and physically buff. His work attire consisted of a tiny red bikini and a Santa hat.  The hotel was called the New Orleans House.  We learned that it was a male only guesthouse / bathhouse, where clothes were optional.  Not your typical neighbors.  “Oh my gosh”.

On the other side of our house was a dessert restaurant called “Better than Sex”.  They opened late and provided live entertainment; essentially a nightclub.  Apparently we were right in the thick of the gay village, in fact, a rainbow painted tourist trolley car ran pass our house every 20 minutes.  At the time our kids were 16 and 18 years old.  Thankfully, they were old enough and worldly enough not to be too confused or shocked by the Key West Duval Street party culture.  Over the next four days we had lots to chuckle about.  Transvestites quickly became common place.   Men in tiny bikinis and Santa hats were everywhere.

Life one block off Duval Street really kicked into high gear after dark.  It was like living inside a disco ball.  The walls of our little house vibrated with our neighbor’s bass speaker.   The Bee Gees and Gloria Gaynor dance music blasted into the wee hours.  Three o’clock, four o’clock, “Oh my god can you believe this” – five a.m., before the dial was mercifully turned down. On the positive side, the streets were deserted during the daylight hours while everyone else in Key West slept.

An unexpected perk of our little rental house was the pets. We had wild red chickens living under the backyard shrubs and a cute feral black cat who liked to sleep on our patio furniture.  We found a paper bag of chicken feed in the kitchen cupboard and a can of cat food in the frig.  The chickens were quite skittish and ran if you approached them but they liked to sneak out and steal from the cat’s dish.

In the end it was a great Christmas.  We achieved what we came for.  Santa did find us on Christmas morning. We played in our private pool and the tops of our noses turned pink under the warm Florida sun.  We did lots of touristy things like visit Hemingway’s Home and the Audubon House.  At the Sunset Pier we watched the sky turn deep orange before it dipped below the horizon.  There was laughter and lots of memories created.  It was four treasured days of each other company.  A perfect Christmas for 2010.

Check out her blog and some of her favorite posts:

Administrative Note: The Green Study is on hiatus this week and will, in the meantime, be posting the Honorable Mentions for The Green Study Holiday Humor Contest, as well as passing on some blogging awards. I look forward to catching up with everyone upon my return!