Does it really matter? I blurted out this question in the middle of a school equity team meeting. We were discussing how teachers approached dress code issues and the usual example of saggy pants, underwear on display. The discussion was focused on how not to handle the situation punitively, but rather provide some guidance and instruction to the child to understand what was appropriate in the classroom.

This question about what matters has been cropping up repeatedly in my head. It’s not a flippant attitude – it’s an awakening. I thought getting a tattoo and quitting my job to pursue writing were the markers of middle age and time a-creeping away. But the red convertible is happening in my head. Trying to sort out what is worth spending my emotional and intellectual energy on is the greater challenge.

For much of the first half of my life, I have been disciplined, strict with my personal expectations and intensely goal-oriented, which often rolled into critical judgment of others. Conservative in my personal conduct, but growing increasingly liberal in my thinking, I wonder about the evolution we often see in humans throughout their lifetimes. This is the path – a shifting, winding path that one hopes is progressive and enlightening. 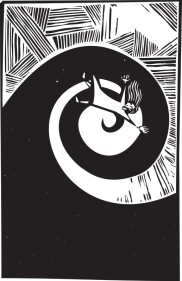 I have dreams about mortality, waking up, afraid that I’ve wasted so much time doing very little. What neural pathways are now ruts? Can I change? What would I change? When will all that past emotional masochism, not to mention smoking and drinking, catch up to my body? I am not a nervous, anxious person as a matter of practice, but occasionally my mind goes into free fall. I catch myself, like that startling, semiconscious moment before sleep when you feel like you’re falling.

I’m experiencing a metaphorical hypnic jerk, startled by how many years have gone by, how long it has taken me to learn how to take care of myself, how to love others with my whole heart. It has taken me so much time to come to terms with the past and to learn to be present. And everything has to constantly be revisited in order to hold onto those lessons.

I’ve always had the sense that being a survivor was the holy grail, but I’ve been there, done that. It feels like greed to want more, to want to live a life not just in resistance to failure. A friend asked me why I felt like it was selfish to want to be happy. I don’t know what happiness looks like and what it would look like for me. Maybe it’s here and the skill I lack is being able to see that, without feeling like the other shoe is going to drop.

The motto repeated in my family was “Prepare for the worst, hope for the

best.” It sounds nice and pat, but it’s a dichotomous edict, to continually try to imagine the worst thing that could happen while remaining optimistic. I’ve often been called a pessimist, but I secretly (perhaps wrongly) believe that I’m an advanced optimist – I recognize the 15 million ways things can go haywire, but I’m always willing to try, to move forward, to apply myself.

I fear becoming rigid and brittle and hardhearted as I go through life. I see it in others. The fear of loss hardens their outer shell. They become less forgiving, less kind, less adaptable. They forget to question their beliefs and habits. Nothing new is allowed to enter. They live, but in a shrunken, isolated prison of their own design. The fragility of body accompanied by less and less neural plasticity.

Epiphany is sometimes represented as a one-time fork in the road. But change is a choice that has to be made repeatedly and likely does not lie in picking a specific road, but in how one decides to travel. It’s hard to leave the preconceived notions and the well-trodden paths of the past. Each time I think I have a grasp on the journey, I get startled into some new awareness. I realize how little I know, how much there is to learn and how this anticipation of more knowledge is exactly what happiness looks like for me.

21 thoughts on “Hypnic Jerks: Not Just for Sleeping Anymore”