There are mornings when I wake up and I feel low. Something rotten I did years ago pops in my head and I cringe. Or I get a birds-eye view of my life and it looks less like happy mediocrity and more like grist for the mill of humanity. Small, unimportant, irrelevant, pointless. I remember news stories that illustrate how awful the world is and imagine all the cruelties happening at this very minute.

This is what depression looks like for me. It’s not debilitating. I recognize it for what it is, just a familiar shadow that darkens my doorstep on occasion. It’s the not-so-secret secret I’ve lived with my whole life.

As I’ve aged, my depression is less something I fight, get over, work through or fix. I lay down with it. I settle in. I ride it out. I end sentences in prepositions, smile slightly at my moroseness, eat comfort food and talk to friends.

Even in my depression, I recognize my good fortune. I know in the present that it will end. I know at my core that the next morning or the next or the next, I’ll wake up, the veil lifted from my eyes, the fog from my brain – everything will be okay.

I come from a family where everyone is officially and unofficially diagnosed with something. We talk about it openly, with an odd note of pride that we have a solid grasp of who we are.  We nurture twisted humor, a buffer against the realities of mental illnesses.

We speak of “funks” and moods, of OCD and bipolar as if talking about vacation plans. Some of us have tried medications, rehab, old-school sanitariums. We know the twelve steps, tough love, interventions and rock bottom. Many of us drank, did drugs, ate too much, gambled, slept around, lost jobs, lost children. Some of us died. 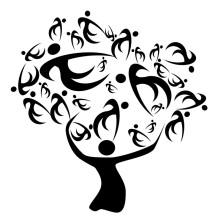 isorders – this is the language we know each other by. We were ahead of the cultural shift, talking about things that other people were masking behind tight smiles. Sometimes I feel that my depression is all that binds me to my family history.

My father committed suicide. I didn’t know him well. He left when I was 5. I found him years later, but it was too late for a relationship. I was embittered by abandonment to an abusive stepfather. My nervous smile when meeting him masked a simmering rage.

A few months after seeing me for the first time since my childhood, he killed himself. It left an indelible scar. The 5-year-old in me saw causation, correlation. I was unlovable when he left and unlovable when I found him again. I learned years later that this hadn’t been his first attempt. It wasn’t about me… it wasn’t about me…

For the first decade and a half of my adult life, I drank a lot. I smoked. I took risks. I did not care for myself. I survived because I am a gritty soul, finding humor in the darkest corners and with a self-perception that was eventually my saving grace. I found friends along the way – crutches, muses, bandages, lost souls like me. I learned that whatever lurked in my mind, it was survivable.

History. Depression opens it wide. Every loss, every bad relationship, every thing I’ve ever done that was unkind, dishonest or thoughtless, rises to the surface. I’ve never found a way to settle those ghosts once and for all. Some of them, I just think wryly “hello, there old friends”. Others make me foul-tempered. Enough already.

It used to be that when I felt like this, I’d fix myself a hot cup of coffee and have a smoke. It soothed me, this ritual of caffeine and nicotine. The long, slow draw made me breathe, sighing smoke and sinking into thought.

I gave up smoking years ago. I gave up regular booze about the same time. Then I couldn’t sleep and had to cut back on caffeine. I focus on getting exercise. I write the rawness away. I indulge myself with comfort food and entertainment until I can no longer sit still. Until the fog is burned off by the sunlight.

My depression isn’t what it used to be. Binge watching Burn Notice with a plate of mashed potatoes, is a far stretch from the good ole’ days of waking up hungover and wondering where I’m at or where I’ve been. These days, I know where I’ve been and I know the shadow that sits comfortably beside me. It won’t always be there, but it will likely always come back. I’ve traded in destructive coping for active self-care.

I’ve lived long enough so that this trickster of the mind, this misstep of synapses and neurotransmitters, has mellowed with age. I’m one of the lucky ones.

45 thoughts on “The Nostalgia of Depression”