Posted on September 1, 2016 by Michelle at The Green Study

The summer is almost over. School starts again. We’ve returned from vacation and I’ve returned to writing. And to paraphrase Sergeant Schultz, I’ve learned nothing. I really thought I’d learn something; that I’d be awash in epiphanies and personal revelation. I thought I’d be more fit, more well read and in the end, happier than my current moroseness belies. The first title I chose for this post was “I’m Still Me. Damn It.”

I celebrated my 49th birthday in Monterey earlier this week. 31 years ago, I was 18, fresh out of basic training, attending the Defense Language Institute at the Presidio of Monterey to learn Russian. As I ate dinner with my husband and daughter, overlooking Monterey Bay, I felt old. Everything was at the same time alien and familiar. The bark of the sea lions, that fishy smell so common on wharves – those things were familiar. 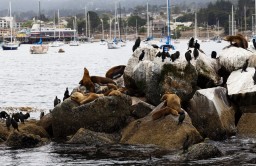 Cannery Row was unrecognizable. The little bar where my underage drinking buddies and I could score KB Lagers was a sandwich shop. We’d go to Kalisa’s to drink and listen to singers, standup comics, to watch belly dancers and then stagger loudly and drunkenly up a long hill to our barracks. The next morning, PT and hours of language classes. Rinse and repeat.

I was blessedly young and stupid. I still thought I might be a spy or a roving journalist or a novelist. I still believed my value was in what I’d do, not who I was or who I’d become to someone else. I thought I’d be sophisticated and witty. I wore skirts and heels and looked at myself in the mirror a lot. I thought sex was a precursor to love and that male attention was to be coveted.

Some bad things happened that year, too. Things that made me stop drinking as much. Things that made me more solemn. I was lonely much of the time, even in groups of friends. I realized that I was not a good sidekick, team player or party girl. I was adept at being a chameleon. I could read the room, but that skill didn’t ameliorate the intense sense of isolation. I hadn’t yet had therapy or confronted my family history or learned that loyalty, my loyalty, should be earned.

I smoked a lot, sitting on benches on the shore. I wandered through bookstores and libraries. These were only slivers of time between classes and military obligations and barracks living. They are the few slivers that I remember with clarity. 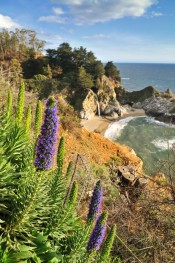 A German linguist, training for reserve duty, befriended me. We listened to Samuel Barber’s Adagio for Strings while driving along Big Sur. It was one of my happiest moments that year. I talked to her last month. She laughs big and is kind. I still wonder at and feel gratitude for our friendship.

I met my father while I was in Monterey. I hadn’t seen him or spoken with him since I was 5 years old. I knew he lived in San Francisco, so I opened a phone book, found his name and called him. In person, he was small and hesitant. Not the smiling tall 19 year-old I’d seen in photos, with me on his shoulders. He brought his second wife with him. His second wife was all Californian – bleached and tanned and bedecked with bracelets and earrings that distracted me every time she moved.

I was polite but rigid. I resented his polite conversation, seething inside. He abandoned me to a stepfather who hated me. I thought of how poor we’d been and how my mother struggled to support us. I looked at my father and his spangly wife and decided one meeting was enough. When he called to meet again, I told him I hadn’t had a father for 13 years and I didn’t need one now. How unforgiving we can be when we’re young.

Four months later, he sat in the car in his garage, hose from pipe to window and killed himself. Unbeknownst to me, his wife was leaving him and he’d sustained a back injury that made him unemployable. But I had been cruel and dismissive and that is my indelible shame. I learned much that year – the shame of wanting love and pushing it away. The shame of believing in people too soon or too late. Lessons all.

I’ve never been a fan of nostalgia. Perhaps it is because I feel the lessons and memories of my youth so acutely. I always think that the best time of my life is right now. For some people, this might be called optimism, but being who I am, I realize it is more an acceptance that this is it. If I want it to be better, I have to do something. Sometimes inertia is okay, but at other times it seems intolerable.

Still, there’s groceries to get and a lawn to mow. I write my to-do list and prepare for a day of chores. A gull from one of the lakes flies overhead squawking and I am reminded of the gulls along the Pacific shore. I am reminded that I took a vacation, that I took a summer off from writing. It feels as if I were never away.

← The Green Study Takes a Rest
For What It’s Worth →