Well, here we are – the culmination of waling on each other for the last year and a half. The result of bickering, lying, name-calling, smearing, backstabbing, flip-flopping, and deception – that toxic dump we call politics. I’m not watching, listening to or getting whimsically drunk during the inauguration. Call me naive, but I don’t think jerks should be celebrated. But hooray for the peaceful transition of power.

How long have awful people been winning and when did it become the norm? Day in and day out, I struggle with not being a crap human. But these people, they are not decent or ethical or kind. There’s no moral quandaries that keep them awake at night. Even supporters of this confederacy of dunces have to admit they wouldn’t leave children in their care. They look like they might eat them, but only the choice ones.

This administration won’t even be cognizant of their own shittiness, because they’re surrounded by humans of the same ilk. They will go through their lives sheltered from the consequences of their words and actions. They’ll write autobiographies (by ghost/poorly compensated writers). As they lay dying, under blankets made of extinct animals and unwanted babies, their well-meaning or grievously indebted family members will surround them. We won’t even be able to witness the palpable relief as they expel their last breath. Their funerals will be well-attended. And they will be a pile of ashes or bones before an accurate portrayal in a B-list movie reveals them to be the sad little meat package they were. 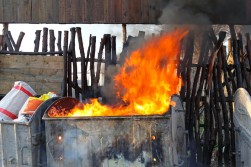 Someone proposed that the rise of Trump was aided and abetted by the popularity of the anti-hero in our entertainment.  These thoroughly unlikable characters who are driven by greed, revenge and pettiness have been peppering our culture more and more frequently. I’m a fan of nuance, but there is no nuance in elevating drug dealers and serial killers to hero status. And reality television is a vast cesspool littered with the most unlikable humans you never want to meet, yet that is where our attention turns.

Every day, I try to be mindful, which also means recognizing the moments when I haven’t been – when I was too harsh in tone or quick to anger. We try to console ourselves, we’re only human, tomorrow will be a better day, apologies all around. So I cannot wrap my head around the rewarding of power and money and attention to people who say and do awful things as part of their personal protocol.

I love this country. Some things are easier to embrace than others. Bleeding heart liberals (which are, in my opinion, the best kind of liberals) are often accused of being intolerant of racists and misogynists and the deliberately ignorant. I’m down with that. This whole political season has seemed like upside-down world to anyone who is measured and rational in their thinking, and has even a scintilla of compassion for other humans.

The level of pride being taken in passing on and doubling down on bad information is appalling. The blitheness with which we are told to brush aside insults and slander and crudity is breathtaking. I can’t relate to the conversation anymore.

Today, there will be a lot of dancing on graves, as well as hand-wringing. It is the day I put on my blinders, focus on those things that are important and stop reading anything that involves some idiot’s Tweets.

What I love about my country is that even if an asshole is put in charge, we can still be better people. We can still be better than some jerkoff with a microphone and a wad of cash. We can still focus on the values of compassion and freedom and hope for a better world. That’s the America I will stand for, work for and believe in. And it’s not going to go away just because some billionaires paid to play.

Welcome to the next 4 years. Choose who you want to be, but don’t let a douchebag be the example. Inaugurate yourselves as protectors of each other, of this country, of the planet, and of the future.

47 thoughts on “My Country, Where Jerks Finish First”