I’ve been living a summer in quiet desperation. Fall is creeping in around the mornings. I smell it in the air and see the frantic scurry of squirrels hiding their winter stores of food. Usually, it brings with it a sweet melancholy that makes me more creative and introspective. This year seems different.

I turn 50 shortly and it’s clouded my mind in all the expected ways. Ways that seem like stages of grief. I’m in the bargaining/rationalization phase. Initially, I mourned that there was less ahead of me than behind me. Then I tut-tut-tutted myself. At least I’m alive. It seems a banal reassurance, because if I weren’t alive, I’d hardly be agonizing over the fact.

This could be the beginning of a long diatribe about the visceral signs of aging now creeping up on me. It’s all been said before – gravitational pull on body parts, the decrepitude of the mind, the regrets of a life half-lived. But I stop myself mid-wail. That is not my story, because that could be anybody’s story.

My story, my peculiar little piece of navel-gazing, is my disappointment that nothing has changed. No grand epiphany about grabbing life by its nether regions and hauling off to Nepal. No reawakened sexuality turning me into a feral alley cat. No heartwarming reunions with high school chums or estranged relatives. No grand realization that turns my nonexistent career into a lecture tour, Times book review, or even a paycheck. It’s still just me.

Everyone has a life narrative that they tell themselves. Mine was always that I was a late bloomer. It was an easy pattern to see – everything always happened with my friends first – college, marriages, babies, careers. I started college late after a stint in the Army,  married in my early 30s and had a child when I was 37. And I never had a career, just jobs. I could joke about how my whole narrative was one long procrastination.

At 50, the late-bloomer story is starting to wear a little thin. And I have to ask myself, if 50 years of action (and inaction) didn’t lead me to where I want to be, is it time to change the destination? And shouldn’t the journey be a little more enjoyable?

It’s funny when you’re younger. You assume by 50 that things will have been settled, that where you end up is where you intended to be or at the very least, where you’re okay being. But just as society has begun to write me off, I’ve started feeling my oats.

Hatred and empty noise! Old, faithful companions of the strong, the essential.

Hatred is the murderer.

Empty noise is the gravedigger.

But there is always resurrection.

Over the last few months, wallowing in a micro/macro depression (woe is me and doesn’t the world just suck?), I’ve realized what a coward I’ve been. It’s a harsh, but necessary realization. I’ve been so distracted by the empty noise. And I’ve wanted to be distracted, because if I weren’t paying full attention, I wouldn’t have to take full responsibility.

If I were to describe the perfect me of my intentions, it would be a physically fit polymath with strong, loving relationships, charitable works, and a steely sense of integrity. If I were to describe the real me, the one I live with everyday, the picture is quite a bit lopsided, inconsistent, and always, irritatingly, a struggle. That damned human element.

One would imagine I have grandiose plans moving forward. My opening gambit on turning 50 is a real gob smacker. I’m going to stop taking vitamins.

Now hear me out. People say that taking vitamins is like insurance for nutritional deficiencies in our diet. The science doesn’t support that, yet even knowing those facts, I have still been taking a multivitamin and flax oil supplement for years. Does taking those pills make me less diligent about eating a nutritionally dense, well-balanced diet? I would say yes. The backup plan has become the plan. 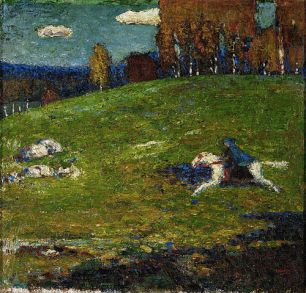 I’ve been thinking a lot about this idea – all the insurances we put in place. I’ve been so set on being safe, carrying all the right insurances, having backup plans to the backup plans, that I’ve filled my life with safeguards for a life I really am not living. Because while I fearlessly fail on a daily basis, I’ve not allowed myself to fail spectacularly. I’ve not put anything on the table worth losing.

So today, I take no vitamins. Tomorrow I submit a short story to a lit mag. Or at least I eat some leafy greens.

Lately, I’ve been reading Kandinsky: Complete Writings on Art. Vasily Kandinsky began his professional career in law and economics. He chucked it all at 30 to begin painting studies. All art in this post is his – a testament to his openness and intellect in exploring art. I bet he didn’t take vitamins, either.

30 thoughts on “Empty Noise is the Gravedigger”