I’ve never been someone at a loss for things to write about, but sometimes I wonder at my ability to overthink things. That’s a lie. I don’t believe there is such a thing as overthinking – at least not in a climate where people are egged on to abandon their own thoughts in favor of memes and outrage. 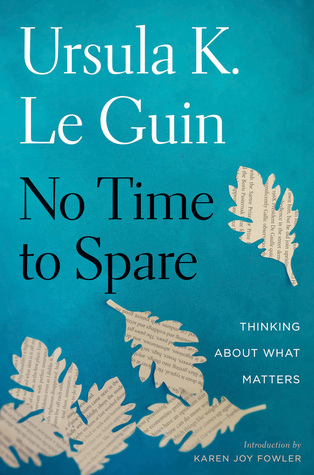 This morning I was reading a collection of essays by Ursula K. Le Guin called No Time to Spare: Thinking about What Matters. It made me think about details. One of the essays was called “Chosen by a Cat”. It was a rather long essay about her cat. At first, I felt an edge of disinterest telling me to move on. But I stuck with it and the more I read, the more compelled I was to finish. Why would an essay about a cat be compelling?

I have cats. One would think I’d have an innate interest, but my cats require a lot of time and care and attention. I’d rather not give my time over to the cat that is not mine to truck to the vet and not one whose random effluvia I encounter on a regular basis. Much like I didn’t want to hear about other babies while mine was keeping me awake all night long. Still, phrasing and details and perspective can make the most dull, inane subject seem interesting.

This post is a bit of a writing practice. Take something ordinary and write about it. Free associate. Meditate. See what comes to you.

Food with a View

Since I am up at 4am, breakfast is a solo affair. Lately, I’ve come to enjoy the slow process of slicing up onions, mushrooms and tomatoes. I toss them in a pan with an egg and some spinach. I eat with leisure, pouring over The Economist or reading essays as the coffee maker burbles out its magic elixir.

When I was young and fantasized about what I’d do and be, I thought I’d be a journalist, traveling the world, taking on lovers here and there, and being an entity unto myself.  The snapshot in my mind of this amazing life was me, drinking coffee, reading a newspaper on a balcony with an ocean view.

Here I am, a married suburbanite parent. I love my life and my family. But a little part of me still longs for that sense of possibility and luxury. Making myself a fresh breakfast, reading the news, sitting in my quiet kitchen, my latest lover (of 18 years) dozing a couple of rooms away, a child I never imagined. I’m pretty sure I hear the ocean.

They Grow Them in Cans, Don’t They?

My favorite thing about slicing mushrooms is that they look like what mushrooms have always looked like in pictures. The knife slices easily through them like butter. I throw what looks like a half pound of mushrooms in the pan, but the heat makes them sweat away their size and color until they little resemble how they started.

Until my late 30s, I’d never eaten a mushroom except out of a can. I remember watching an episode of Jamie Oliver’s “Food Revolution” in which elementary students could not identify common vegetables. But growing up poor can be like that. You get cans from emergency food shelters. Cans are often cheap and on sale in large quantities, and they last a long time.

Mushrooms that weren’t a greenish gray seemed foreign to me. I made no connection from them to the pictures, either in storybooks or cooking shows of white, perfectly sliced plant food. I’d never seen or eaten a kiwi, either. Economics and education and accessibility – these change one’s menu and palate.

Once I was at a music festival in Canada. There was a small caravan of the Canadian versions of Cheech and Chong next to our campsite. Like a movie caricature, every time they opened their door, pot smoke would come pouring out. A Canadian being high is an odd thing – how do you get more mellow than mellow?

Several people were eating “magic” mushrooms. They were seeing things and were subsequently paranoid and lost. They stumbled about campsites, disoriented and babbling. I’d never even known that was a thing. With my midwest upbringing (before the advent of rural meth labs and the current opioid crisis), booze and pot were the drugs of choice.

By that time in my life, I’d become a teetotaler. With a family history of alcoholism and a bad reaction the last time I’d smoked pot, I was completely sober amidst a crowd of drum-beating, mushroom-eating stoned drunks. It’s an odd experience, like walking through a circus. Your normal no longer seems normal and you become the oddity.

Sometimes I ride myself about all the navel gazing and self-reflection that I do when writing. The thing is, once you realize the details of your own life – the complexity, the stories within stories, the layers of history and habit, you see others differently. We’re in an age that chooses to gloss over individual details, to caustically lump each other into easy categories. To imagine one person’s life and all the details that make them who they are, we have to look past politics and geography and gender and economics. Details make the story and everyone has their own.

26 thoughts on “Riffing on Mushrooms”