There is an argument I consistently have with myself regarding civil discourse. In theory, I believe in civility. I believe in thoughtful discussion. Whatever vulgarity or cuss words I’ve used here, have always been of my own volition, albeit I have taken more opportunities of late to use them. I am an angry person. I believe in justice and I loathe deliberate ignorance.

For all the understanding and tolerance we are supposed to extend to people who tell us liberalism is a mental disease and that they’re giddy about these current circumstances, we get very little in return. The message is that we are to fall in line and adore their great leader or else what? They’ll call us names? Vote in spite? Threaten us with violence?

Reading comments from people who seem to adore the president and his mafia, I am completely baffled by the appeal. But I’ve never understood celebrity worship or the idea that being unfiltered is somehow preferable to being thoughtful. I’ve never invested my sense of self in strangers on TV or politicians bloviating over donuts. I don’t get my news from Facebook or Twitter. I know that reality TV is curated bullshit. I’m not going to wear clothes with people’s names on it, whether it be Tommy Hilfiger or Trump. I am no one’s standard bearer or billboard.

And that’s what I find so baffling. I grew up in a poor working class family. I learned several skills or beliefs in this environment: 1) That nobody is going to fix my life 2) How to spot a bullshitter a mile away 3) Television is fake and politicians lie. I met people all along the way with the same beliefs. Those are the people who progressed, got out of poverty, worked hard to get an education and most, if not all, are solidly middle class now. 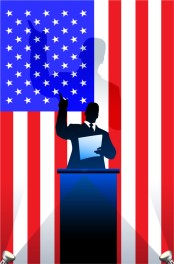 en I saw the chanting crowds in Minnesota yesterday during another feed-his-ego rally, it made me feel ill. There were so many people at the church of Trump. So many people slavishly cheering and grinning and repeating tired mantras. So many people worshiping at his feet. It must have been very gratifying for him, that he could say or do anything with impunity and people would still hold him up as a false idol, clap and cheer and act like glorifying him would somehow raise them up. It was grotesque.

Does it make a difference that there were protesters, yelling, carrying signs? Not to the Trump supporters. Those protesters are for people like me – letting me know that I am not alone in my disgust with this administration, encouraging me to wage protest in my own way. Protesters are important to those of us who eschew crowds, but feel isolated in the face of authoritarianism. It’s a public message – we’re not laying down for the jackboots to march all over us.

But it does bring us back to the issue of public discourse. I’ve been having a come to Jesus moment with myself (which is a really funny thing for an atheist to say). I keep thinking of that Martin Luther King quote:

First, I must confess that over the last few years I have been gravely disappointed with the white moderate. I have almost reached the regrettable conclusion that the Negro’s great stumbling block in the stride toward freedom is not the White Citizen’s Council-er or the Ku Klux Klanner, but the white moderate who is more devoted to “order” than to justice; who prefers a negative peace which is the absence of tension to a positive peace which is the presence of justice; who constantly says “I agree with you in the goal you seek, but I can’t agree with your methods of direct action;” who paternalistically feels he can set the timetable for another man’s freedom; who lives by the myth of time and who constantly advises the Negro to wait until a “more convenient season.

The idea of negative peace and being devoted more to order than justice is something that plagues moderate middle class white people. We’re not all inherently cruel or uncaring, but we mistake the lack of violence or strong language or raised voices to mean that things are quietly being worked through and that if something really bad is going to happen, the government will prevent it. We were raised to believe in Big Daddy and that there would be things that wouldn’t happen in our beloved America.

But that is not the case. Most people of color, women, chronically ill, vulnerable children and the elderly know that the system turns a blind eye to systematic abuse, gaps in care, and cries for help. That power and wealth corrupts absolutely and disconnects people from their humanity. That leaders, those who can truly maintain a balance between personal ambition and that amorphous concept, the common good, are far and few between.

What we don’t get is that we are the stopgap, the brakes, the safety net, the protection against authoritarianism. We have to choose not to be bystanders, not snapping selfies in front of tent cities on U.S. soil, chatting up the ICE agent while fearing the bogeyman foreigner. What does our country need from us now?

Many of the words I read from Trump supporters are no longer part of any rationale. They’re mainly spewing cutesy insulting names, parroting lies with no underlying facts, sending links to un-sourced, biased news stories, using the polemics of either-or for every single argument. Gun control = no guns. Pro-choice = drive-through abortions. Civil liberties for all = war on religion. Free speech = no consequences for said speech. Political correctness = silence, not civility. They’re digging in, not listening, not thinking.

Does it make a difference if I call the president a bastard? Have I, too, come to mistake strong words for strength? Have I adopted a bully’s approach to discourse? Or will I be the moderate white person – choosing peace over justice, order over resistance? And am I succumbing to the unthinking, blind rhetoric of both sides, falling prey to the false equivalencies equating those who fight for justice and those who just fight?

These are tough questions that have been unraveling in my brain over the last week, because I am trying to find a better way forward. Not for peace, but for integrity and progress and so that someday, I can look back, and know that I didn’t just let it happen.

What do you think of the public discourse?

Is fighting fire with fire necessary or is there a better way?

What truly makes a difference?

26 thoughts on “Bullies, Bystanders, or Bravehearts?: Questions of Civic Participation”