When a sitting president declares that he is a nationalist and thousands of people cheer him, this is the outcome of zombie patriotism. American exceptionalism has always carried this downside. If we believe that our country is unassailable in its virtue and honor, we put blinders on to the very dangers that will contribute to our downfall.

The president is taking a third of the population down this road – a road that has a future of unmitigated violence against those who do not embrace this single-celled version of our country. Of the remaining two-thirds, we see complicit behaviors out of either fear or a slobbering thirst for power through association (hello Congress). We hear the people whose mouths protest but whose actions belie something else entirely (Senators Sasse, Collins, Flake, et. al.).

Many people, myself included, have protested, organized, and gone through all the civic venues to push back against this kind of authoritarianism. I will be the first to admit, I’m still having trouble accepting that it is getting this bad. My immediate circumstances have not changed and my life is still relatively decent, a function of white, middle class, heterosexual privilege. It is this mindset that has made me think about the Good Germans. How bad does it have to get before I think it’s bad, before I realize it’s too late?

While people protest that this period in history is not like 1930s Germany, they’ve ignored the fact that at some point, there will be a recession, a terrorist attack, a natural disaster that will be the tipping point. This president and his lackey mouthpieces (FOX included) have set the stage for blame and viciousness and violence. They have set the pot to simmering, so that with a little more heat, it will boil over.

That the president is a stupid, awful human is irrelevant. He is stupid and awful in the way that all bad humans are stupid and awful. How can I get what I want, regardless of the consequences to anyone else? I have never understood the appeal of this braying donkey. I don’t understand fandom of any ilk. Why should one human worship another? And so many of these people claim to be of a religion that condemns false idols.

There are people who are curious and people who are not. Incurious people repeat what they’ve been told and like someone else to create their talking points and memes. These people can be found in every political party or leaning.

Curious people dig deeper, ask questions, refuse to be told what to believe. Curious people save the world, because they don’t assume paradigms are permanent. Incurious people fear change, ambivalence, and dichotomies. Nuance is just a thing intended to confuse them and will be rejected in favor of anything binary. 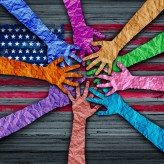 I am so often baffled by the need to see the world this way. I would find an unchanging world of similar people to be claustrophobic and uninteresting. I am grateful to live in a country that has such a wide range of beliefs, religions, languages, and cultures. This is the country that I feel patriotism for – the country that shines BECAUSE it holds such variety, not IN SPITE OF it.

I hear a lot of people saying “we’re better than this”. No, we’re not. This is what we are – a nation with a bloody history of oppression and thievery. We have to work to be better. We have to understand and acknowledge our history to move beyond it and we can’t waste time on false equivalencies between those who, however ineffectively, are trying to improve things for all people and those who actively agitate and incite violence against others who are not like them.

What these nationalists, these self-declared cultists want is sameness, predictability, the bland whiteness of a culture built on stealing that of others. They want the social rules that governed their grandparents to govern their grandchildren. They want pink and blue. The devout and the godless. The easily labeled and easily condemned. They want people to look at them with reverence because they just happened to be born pasty white in a country that reveres pasty whiteness.

The luck of the draw suddenly becomes a proud, personal virtue – something they earned not through hard work, or strength of character but because their parents had a couple of beers and felt randy. How can you build an entire belief system on that?

In addition to this, there is personal resentment. They didn’t think they should have to change. They expected their generation to live as the generation before, whether it be farming or fossil fuels or anything else not already overrun and gutted by corporations. America has survived many things because it is adaptable, not because it is intransigent.

A right winger agitator said that one is not a real American, unless their family goes back four generations. What she suggested is that there is a very small core of true Americans, giving no particular truck to the indigenous populations we slaughtered upon arrival. I’m a first generation American, but I’m white so I might get a pass. Of course, that is cancelled out by the fact that I am a liberal.

But I’m like a lot of Americans. I served my country, voted regularly, paid taxes, volunteered in my community, raised my progeny to be a kind, respectable citizen. When my luck has fallen, I’ve come up with a different plan. I was raised with the idea that life is inherently unfair, but that I must do my personal best, work hard, constantly learn, and to not waste time blaming others – that blame is not an actual solution.

What these people screaming in adulation at this president fail to see is that nothing they are doing or believing will make their lives literally better. It’s wasted energy. Even if they end up in their promised land of all white heterosexual Christian people, they will still find a way to blame and separate and hurt each other.  It’s not a matter of circumstance. It’s a matter of character.

I wrote this post prior to the events of last week, when individuals turned the stochastic terrorism of the president into domestic terrorism – attempted and actual murders of fellow citizens in the name of racism, anti-Semitism, and partisan politics.

Patriotism is defined by our values – a subjective term, a propaganda tool, a way to slap a label on all kinds of nefarious behavior. You can declare yourself a patriot and still be a complete shit of a human being. And in the lingual nightmare that has become our national discourse, it’s a title I’ll happily shed in pursuit of a more just nation.