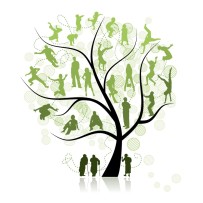 For years, I lived blithely with the delusion that I was none of those things. After all, I didn’t marry or have kids young. I joined the Army, set out on my own, made friends along the way, got a college degree, drove in the big cities, married a man who wasn’t abusive, had a kid who wasn’t a surprise or a burden – I was as different as could be. Except I loved my books and my disapproving lip pursing. I could tell myself that mostly, I wasn’t them.

And what was so wrong with alienating all your children, living in seclusion, having awkward exchanges with people who laughed uncomfortably at your dry humor? Why shouldn’t oddly-named dogs and weighty tomes be your friends? Because any child knows that whatever your parentage is, it is completely messed up and you never want to be whatever that is. I’ve met the rare people who adore their parents and I do my best to avoid them at parties.

Over the last year, I’ve had occasion for more social interaction than I think should be necessary for human existence. My façade is slipping. I’ve become slightly more brusque and thoughts that I’d normally keep to myself are leaking out all over the place. I’m alienating people. Isolation is starting to hold appeal. I might adopt a dog and name it Herbal Tea. I have a bestie that is about 530 pages long.

Conversations with my mother have changed. I’ve apologized a lot, because now I get it. There were years when I mocked and teased her about the pack of dogs she had in tow or the fact that she wouldn’t be discovered, if she died, until the smell wafted down the street and one of her dogs wandered down the sidewalk with a pelvic bone. Seriously, we both think that idea is funny. Birds of a feather make macabre jokes together and all that.

Now that I’ve come to this knowledge, I feel that it should bring a certain level of empowerment and freedom. No longer constrained by who I think I should be, I can comfortably settle into who I am. My daughter has already begun to mock me. I’m so proud.

Michelle at The Green Study51 Comments
Join 21,286 other subscribers