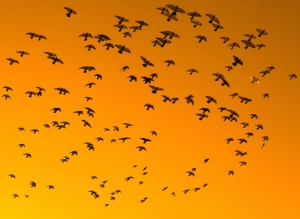 It’s the month of February, a month for wiping out huge inventories of red roses and setting false romantic gestures in motion. I haven’t written much about love and romance, because, with the exception of my husband, I have a long history of being quite awful at it. That’s a subject for another day. Or never.

There’s a kind of love that is harder to practice than all the rest. There are people in my life that make love a challenge, a constant renegotiation to see their positive sides, to recognize their intent versus what actually happens or is said. We all have them – friends or family that don’t make it easy to love them.

Many years ago, shortly after having my daughter, I decided to talk to a family therapist. Some issues of childhood had reared their ugly Medusa-like heads and I desperately wanted to be a good parent. I was involved in a dysfunctional volley of exchanges with someone I wanted to believe could change. I quit acquiescing and started to challenge this person’s behavior.

I come from a long history of mental illnesses and substance addictions. The easiest people to love were the ones that married into our families, but often, due to the aforementioned issues, those people came and went on a fairly regular basis. We got glimpses of normal behavior – just enough to know that normal would be an ambitious goal for anyone in our family.

I have compassion and understanding for those that suffer from mental illnesses. I’m all for social justice and a better system to identify and support people who need assistance and kindness and compassion. When it’s in my face though, infiltrating every corner of my world, exhausting me at every turn, calling me names, stealing my money and holding me hostage to drama, I can feel very hardhearted.

It’s hard to love someone who can only take. They’re so knee-deep in their own shit that they can’t see anything else. You long for them to be interested in your smart, delightful daughter or what you have written or to appreciate what a kind, decent man you have married. But it doesn’t happen. They never ask about your life during phone calls and when they do, it’s a perfunctory nod before they go into their own tales of woe.

Growing up, I was good at being a fixer, a mediator of sorts. This role followed me and even after I left home, I’d get letters letting me know everything that was going wrong, being asked to intervene on this person’s behalf or that. As a kid, I felt important and needed and valued in that role. As an adult, I was frustrated and angry and I’d swear that I wouldn’t get sucked in again. Until the next desperate phone call.

This self-importance gave me a way of positioning myself, a way of seeing how I fit into the world, a false sense of superiority over those more troubled than I. Until my troubles came. Instead of saving everyone else, I had to save myself. If they threw me bricks instead of life preservers, I shut them out. I quit a dead-end job, an off-again on-again relationship, and moved farther away. Emotionally, I might as well have been in outer space, unreachable.

I needed that time to establish my own identity. It’s a natural process as we become adults to see those boundaries. It wasn’t until my late 20s that I recognized that it was even okay to have boundaries -that it was okay not to be a dumping ground for everything wrong in one’s family.

I got married. I became a parent. And my heart softened. I again longed for connections to those people that I had loved my whole life. I longed for some sense of normalcy – family holidays, pictures of all of us in one place, children laughing and playing together, running around the dining room table. I longed for stupid Norman Rockwell. I longed for something that never existed.

Re-entry was horrible and painful and left me heartbroken. The sickening realization came over me that there would never be another family gathering, except possibly for funerals. Even then, we’d stand shoulder to shoulder, like strangers on a subway.

My daughter would likely never know many of her cousins or aunts and uncles. People had begun dying in sad, awful ways before she was born. My father committed suicide. Alcoholism had killed several others. I was left with a handful of people with whom relationships were difficult, uncomfortable and frustrating.

Romantic love, when you’re both ready and right for each other, is easy. Day-to-day love can be challenging at times, but you learn and adjust to the others’ needs. Family love inside this house is very easy. We work together, squabble on occasion, but for the most part, we have each others’ backs.

Loving people that don’t have social skills, who are so mired in their own worlds that they can’t imagine you existing outside of their universe, who only come to you when they need something – that is a tougher kind of love. Loving people that seek to lash out, to cause harm, to damage everything in their path, is nearly impossible.

While in therapy,  I ran across a passage in a book (I wish I could recall the source) that has stayed with me for many years. It referred to treating someone with mental illness like a force of nature. You wouldn’t stay in the path of a tornado, just in case it changes direction. You’d get out of the way, seek shelter and protect yourself. You can’t love a mental illness away. You can’t empathize self-destruction out of someone.

I had more leeway in my life for drama before having my own family. I’m at a time of life when things are the busiest – a young child at home, aging relatives to care for, juggling career goals with family goals, trying to accept that it’s okay to be happy, even when those people that I love are not. But the longing never goes away, no matter how much I intellectualize things.

I love them and I miss them. I’ve helped all I could manage. I’ve listened for as long as I can listen. I will rally myself for another round. I don’t want to enable or to judge. I recognize that their lives can be painful and difficult and I do feel compassion. It’s a hard kind of love.