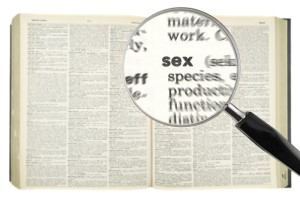 As I continue to write my second novel, I’ve stumbled into a patch of writing ground that makes me giggle like a 10-year-old or mutter “that’s just gross” under my breath to no one in particular. It is never my intent to write about love or sex, here, there or anywhere, but human relationships apparently involve a lot of both ingredients. And unfortunately, both my novels seem to include humans.

If writing what I know is key to authenticity, I am, to use an obvious pun, totally screwed. Not to put too fine a point on it, but I tend to skip the pageantry and focus on the execution. I’ve read a lot of erotica (that’s what they call lady porn) and there are some writers who do it exceedingly well. And inevitably, I look at the writer’s picture and think “that is one adventurous gal”. So wrong, I know. I mean, the point of being a fiction writer is that you get to make up all kinds of shit. On paper, you should be able to write out every debauched, non-normative thought you’ve ever had and not have to go to confession or blush while writing it.

I’m Reality Writer. While I can read a good sex scene until my knuckles turn white gripping my Kindle, in the back of my mind, I usually think: Please, for the love of all that is hygienic, take a shower now. There’s no way, after all that grinding and slobbering and flopping about, that those people don’t reek to high heaven. But no, they’re back at it first thing in the morning with nary a toothbrush in sight. Some things are not, like fine wine, improved with time. So on top of all my sophomoric giggles, sensory issues really impact my ability to have my characters get it on.

It might say something about me that the last really good erotica I read was because of the realistic dialogue. The characters were genuine and funny, so it was easy to overlook that there might have been toenail clippings in the bed or she was going through skipping-a-shave Movember month. It was easy to ignore that he only had a two and a half pack and everything rippled when they were going at it. Or that the dog stared at them the whole time. From the end of the bed.

My novel is not a romance or erotic novel. At least it wasn’t until I tried to explain why my main characters were married to each other. Even if it’s unlikely that sex scenes will make the final cut, I feel compelled to work through their relationship and sex is a part of that. My inclination to cut the scene made me think about what including sex scenes in a novel does to it. Writers I like, outside of the romance/erotica genre, rarely have sex scenes and if they do, it’s because some sort of crime is being committed. Does having a sex scene immediately change the genre of a novel? What are examples of literary fiction where sex is included but not the focal point?

This is how I manage not to write more. I start wanting to puzzle out what kind of writing I’m doing and get completely distracted from actually doing it. She said doing it. Snort.