A Walk on the Wild Side

I came in yesterday evening after digging and planting most of the afternoon, dark rings of sweat on my shirt, dirt ground into the knees of my jeans. My hands were stiff from the jarring strikes of shovel and hoe into sun-hardened clay. After a shower, I tried to sit and write. Every five minutes, I was hopping up to do one chore or another. Normally, I’d spot this as procrastinating behavior, chide myself and force myself to sit again. It’s something else, though.

With my computer crash of last week, I spent most of my days outside, sweating and filthy and in motion. My mind was free of distraction. When I work outside, nobody interrupts me, for fear of being conscripted into weeding. I can spend hours alone. I drink gallons of water, stop and watch a hawk overhead, startle voles in the brush pile, watch as a caterpillar makes its way up a tree trunk.

I live in an older suburb of the Twin Cities, surrounded by little ranch houses built in the late 1950’s. Every house looks the same – some shade of tan or white, desperate to look different with shutters or fences or yard lighting. We attempted this by ripping up the front lawn, piece by piece, and putting in perennial plants. We’re an irritant to our neighbors on one side, who alternately poison and water their lawn in rapid cycles through spring.

A hail storm that lasted all of ten minutes rained down on us late in the afternoon. Marble-sized hail bounced off the lawn and house in every direction. I could smell it before it arrived and pulled tools and gear into the garage just in time. My internal barometer worked, smelling the air before rain moved in, feeling the chill from a slight drop in temperature and pressure – it always makes me think of farmers who know when to come in from the fields and old ladies, whose bunions ache just before a rain. It’s a forgotten wildness, this abstract intuition of the physical world in which we reside.

I had forgotten over the winter, cuddled up to my devices and traversing between house and car and destination and home 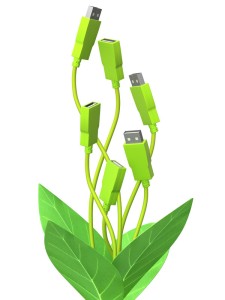 again. I’d gotten wrapped up in issues that were beat to death online – that seem of finite importance when standing under a clear sky, with the sun warming my face. It only takes an hour or two in my backyard ecosystem to remind me that the world inside my study is but a sliver of life.

Sitting down at the keyboard after being outdoors makes me feel like a big, wild thing stabbing at keys in some funny meme or YouTube video. Look at the primitive try to type. Words all sound like incoherent grunting as I write, but I can hear crows cackling two blocks away and notice the stillness that suggests a light spring rain is on its way. It seems a tremendous bridge to cross – this wildness caged and sitting still, trying to funnel it all onto a cold, lifeless screen.

My mind wanders to the turkeys I startled while hiking at a regional park. There were five of them, one a male in full feathered regalia, trying to woo the others. Frogs were warbling away, in a Swamp’s Got Talent sing off. Purple martins and swallows crowd boxes to get the best spot, smacking into each other and fluttering away. The wind blew across the lake as herring gulls swooped overhead and Canada geese escorted their new fuzzy families along the water’s edge, squawking loud commands to goslings who dillydallied.

I think about writing as a state of being, once removed from life. It’s civilized, structured, a story playing out on a paper stage. I’ve often felt a distance from the life around me, too busy in my head building a narrative. I need that distance. Being an introspective introvert in a noisy world requires a buffer zone. Writing serves that purpose, allowing me to create order out of chaos, perspective out of ambiguities.

Being outdoors is a different kind of bombardment. The immediacy of life all around grounds me in the moment. I’ve tried to write while I’m outdoors, but as I often joke with my walking buddies, I have nature ADD. There’s nothing I can do but breathe, listen, smell, observe. I am not me, with a long list of neuroses and adjectives. I just am, no more or less than the red-winged blackbirds that trill at me as I cross the marsh. The bit of wildness that remains within calls back. Me too! Me too!

← Turning the Blue Screen of Death into Lemonade
The Ugly Duckling: The Ambiguity of Fairy Tales →

37 Comments on “A Walk on the Wild Side”