The Green Study’s Positively Happy Nice Story Contest is a great way to win for your local American Red Cross and there’s a mug! I’m shifting the deadline to Monday,  October 3rd. See here for details.

Invitations are flattering, especially if you’re sitting home in your yoga pants/pajamas wrenching words from your brain to make one of those quirky novel things and you haven’t been employed outside of your home for several years.

Your college degree in Soviet and East European Studies became obsolete the year you graduated. You start telling Army stories at gatherings, because being a cold War vet is the most interesting thing about you, even though some of those years were the worst of your life.

Your child no longer wants to be seen in public with you. Your husband has stopped asking when the novel will be done and your friends nod absently when you gripe on about how hard writing has been for you. Again.

So when I got the request to do a podcast, I had to pull out my ego, dust it off and give it a good polish. I restrained myself from saying “I don’t know anything and why do you want to talk to me?” Instead, I looked up some theories, researched some topics, thought about how to articulate my ideas.

Preparation meant nothing when it came to the actual recording. I lost my train of thought mid-sentence. I floated off in tangents and laughed at odd moments. I tried to stay in the moment and listen well without getting caught up in how I might answer, but I umm-ed and meandered. I said things I didn’t intend to say, grasping for order out of the word swamp that is my brain. I realized when it was done, how exhausting talking out loud is for me.

There’s a lot of people out there who know nothing, yet create entire careers out of talking like they do. I know some things, but things that may not be entirely relevant. I know that if I heat up my burrito with the seam up, I might have to clean the microwave afterwards. I know that it’s very easy to get puffed up with words when someone asks my opinion. And I know I am just an ordinary person.

I went to see a lecture last week of a writer I’ve admired for many years and one, given my druthers, I’d emulate – Anna Quindlen. A reviewer once referred to her as an example of the “monsters of empathy”, for her up close and personal view of larger events. There are worse things to be called. But as I sat and listened to her lecture, I felt a sense of loss and perhaps some self-pity.

When she talked about her happy childhood and then her career path, I felt the weight of history upon me. So many years I worked at jobs below my skill level, because that’s what I thought I deserved, not what I was capable of. So many years treading water and never asking for more, because of fear or low self-esteem or whatever road blocks I put in my own way.

Fortunately self-pity has a limited shelf life for me, so I have the required monologue queued and at the ready. Yes, I’m taking the long way round to get anywhere. And my vision board needs to be created on archival paper – something that can withstand the test of time, that won’t yellow or disintegrate. But it’s my way and my pace and no amount of internal badgering is going to change that.

Some days the positive talk works. Others, I sink down into my own mediocrity. I think about this odd expectation that I should be more than what I am. People talk derisively about the snowflake mentality and trophies for everyone. As someone who grew up feeling unworthy and less than, I don’t begrudge making ordinary humans feel special and like they matter. I don’t confuse someone’s kindness with exceptionalism.

Most of us will end up in the proverbial Asphodel Meadows of the ancient Greek underworld, where ordinary humans spend their afterlife. Our good and evil will have run neck and neck, our arrogance next to our humility. Our kindness next to our cruelty. 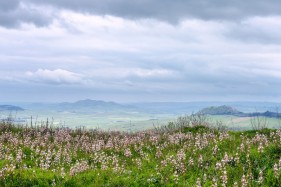 To be more than ordinary requires prescience, which is not something we humans are known for. Ordinary changes in meaning for me as I get older. I’ve begun to see the beauty of nuance and the coldness of multiple choice judgments. Empathy is not a weakness; critically thinking about what is real and true and meaningful is the best work we can do.

It seems as if the potential for cruelty – words and actions – is being acted upon with alacrity in our culture. Every article, news story or post on the misfortune of someone becomes a platform for someone else to judge or moralize or condemn, often viciously and with no regard of what reflects back on them.

In a world where bad news travels fast and we know our lives will end, but never know how or when – to reach up out of that morass and give someone a hand or a kind word is a miracle. It may not be witty or cutting edge or incisively intellectual or viral, but it is rather extraordinary.

Kindness, compassion, empathy – I don’t regard these as luxuries. These are the things that make life worth living. If those are the only ordinary, mediocre, unremarkable things I learn to do well – I’ll see you in the meadows and we’ll be average together.

If you have nothing to do and would like to mock me relentlessly, here is the podcast. It’s 22 minutes long and was supposed to be based off of the post For What It’s Worth, but became a little more political than I would have liked and I realized quickly that I was in over my head.

18 thoughts on “Asphodel Meadows: Where Empathy and Kindness Can Roam Free”