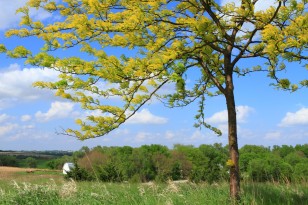 I was listening to Tom Petty this morning, sad that he has passed away at a relatively young age. His music immediately pulls me back into the past, growing up as a teenager in Iowa. It reminds me of parties out in machine sheds in the middle of nowhere, of awful first dates, and coming of age when getting booze and pot and avoiding pregnancies were all that we worried about.

It wasn’t a great age of innocence. We were still in the Cold War. Someone tried to assassinate the president. Terrorist attacks were happening around the world. In 1983, 299 American and French service members were killed when their barracks in Beirut were bombed by Islamic militants. HIV was finally in the mainstream conversation.

Life at my house was disastrous and tense. And everyone in town knew about it.

But I could find refuge in the middle of a cornfield, where life didn’t seem so scary. There were some irrigation ponds several miles outside of town. My best friend and I would drive out there, sit on the hood of my car, smoking and watching the orange reflections on the water as the sun went down. We’d have philosophical discussions about anything and everything. She had a mentally ill parent, mine were drunk and/or dysfunctional. Home was never where we wanted to be.

She introduced me to cigarettes and booze and pot. And I listen raptly to her stories about boys. She was one of those girls who attracted them like flies. More so when she started putting out. Her parents thought, as parents often do, that their child was a good kid. They thought I was a bad influence. It wasn’t the first time in my life I took the hit because I was a poor kid from a messed-up family, so it didn’t bother me.

My friends and I would drive to the closest university town on weekends to hit the frat parties. My car was a jacked-up 1972 turquoise Monte Carlo that I bought for $500. It had shiny wire rims and no car stereo. I had a boom box and a need to tear away at stoplights, as if I were always in a drag race. We’d load up, stocked with cassette tapes, cigarettes, hash brownies, and a mixed gallon jug of Everclear, orange juice and 7-Up.

A gaggle of teenage girls were always welcome at parties. No invitation needed. Over the course of the evening, my friends would gradually disappear with one polo-shirted guy or another. I ended up sitting next to a giant bong talking about the nature of the universe with some kid in a War Games t-shirt. I never did know how to flirt, but I could talk Cold War politics until everyone around me had passed out.

My junior year, while others were diligently working on college applications, I was running and doing push ups and counting down the days. I had decided to join the Army. I made decisions like this very quickly. My instinct about what I needed to do always preceded long thought processes. I knew I needed to leave and I knew I wanted to go to college.

I decided that way about a lot of things, including my virginity. It wasn’t valuable to me – it was just this thing that meant I lacked life experience. I found a boy older than me and got the deed done. It was not as interesting as I had hoped. And there was no point in pretending that it was love.

My true love was a popular, acne-covered boy who I’d loved since 8th grade. I wrote him anonymous love letters, blushed whenever I passed him in the hallway, imagined glances and smiles meant for me. Our sophomore year, his girlfriend was killed in a car wreck. It gave him a tragic air that was like catnip to a teenage girl. I loved him from afar all through high school. Many an excruciating poem was written on the basis of that love.

It was a small school, so his girlfriend had been a friend of mine as well. It was the first time anyone I’d known had died. These days, I can never attend a funeral, without that sickly floral smell of too many sympathy arrangements, and not think of her, lying there, porcelain and pretty in her casket, her manicured hands folded around a rose.

I spent most of high school working at a small cafe in town owned by a married couple. The man was a chainsmoker and coffee addict with glasses that made his eyes look Pokemon enormous. His wife was a tolerant woman and kind. While the police and social services were becoming more frequent visitors to my house, I found sanctuary at the cafe. We’d close up at two on Sundays, after the church rush and the four or five of us working that day would sit down for lunch.

While his wife would tally the day’s receipts, the boss would challenge me to Ms. Pac-Man, a giant video game in the front corner of the cafe. He’d grab quarters from the till, refill his coffee, light his next cigarette off the last and we’d play for an hour before I went home. If I needed money or a ride or a place to stay, they were always there, offering.

It was these strange, unexpected kindnesses that saved me. And they are sometimes the easiest to forget. So often my intense need to burn bridges, to put the past far behind me, makes me forget the people, the music, the memories that provided solace and refuge and helped me grow to be a better person than my experiences might have allowed.

We learn to see ourselves a certain way, to remember our pasts and define our character in the same way for years. Psychologists talk about re-framing our experience which I always understood as being something different. I was repulsed by the idea of revision, of rewriting the painful chapters.

Remembering only the bad served a need in the story I told myself. For me, it was how I could get away, break a cycle, leave behind a life that would not serve me well. But that was thirty years ago and that story no longer serves my needs.

It is why I am stuck as a writer. I keep telling the same story over and over, in one form or another. But it’s not the whole story. I am not the sum of miserable parts, but of parts equally happy and funny and poignant – those girlfriends from long ago, the kindnesses randomly offered, the gangly boys, the music that reminds of me of long, humid summer nights leaning back against the windshield, watching the sun go down.

18 thoughts on “The Waiting is the Hardest Part”